Shihan McCammon began training in the spring of 1987 in Hampton, Virginia under tutelage of Kyoshi (8th degree black belt and Master) Frank Hargrove. Kyoshi Hargove was the President of the North American Shorin-Ryu Karate-Do Association and a direct and senior student of Hanshi (10th degree black belt and Grandmaster) Shugoro Nakazato who inherited the leadership of the (Kobayashi) Shorin Ryu system after the passing of its first recognized grandmaster, Chosin Chibana.

McCammon received his Shodan (1st Degree black belt) in the winter of 1993 under Sensei Donald Bagwell, a staff instructor of Kyoshi Hargrove. McCammon tested for his Nindan (2nd degree) and Sandan (3rd degree) under Kyoshi Hargrove directly in 1996 and 1999 respectively. Sensei McCammon is currently a 4th degree black belt under Hanshi Nakaza, Seiei founder and president of the International Shorin Ryu Kiyobukan. Shihan McCammon has the honor of being only the 2nd person to be promoted in the International Kiyobukan Hombu Dojo, in Itoman City, Okinawa, behind his long term mentor, Kyoshi Brian Hobson.

Today McCammon is a Godan (5th Degree Black Belt) Shihan, a rank and title that was bestowed in recognition of his skill and experience as a teacher. Achieving the rank of Godan was a bitter sweet honor for McCammon as it was award on the death bead of Hanshi (10th Degree Grand Master) Seiei Nakaza, and one that he will cherish always. The title Shihan translates to ‘model or master teacher.’ It implies that McCammon has been recognized as one who has the recognized ability to refine a student through training and instruction, it is similar to the way the military uses drill instructors forge young men into soldiers.

Sensei McCammon lives with his family in San Marcos, California. He is a degreed mechanical engineer, and a strong advocate for childhood education particularly in areas of  science, technology, engineering and  mathematics. 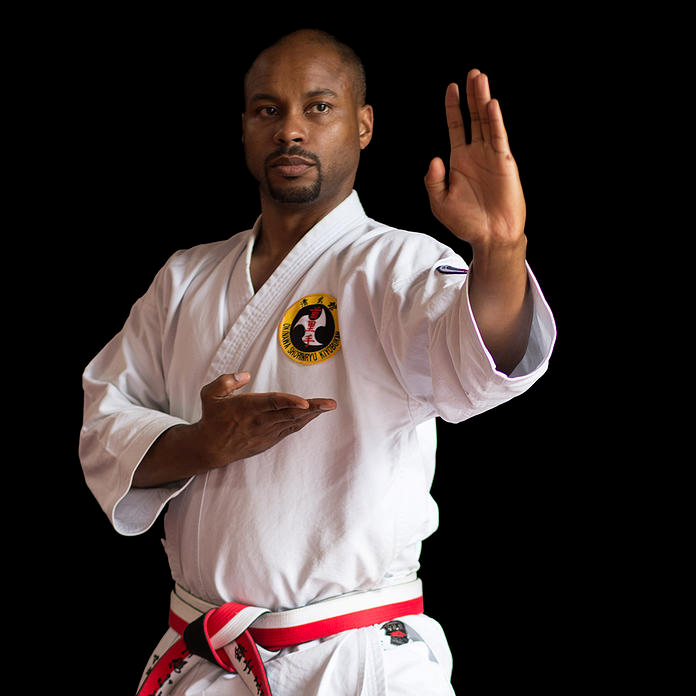 WATER CAN PENETRATE ANY ROCK, BUT YET EMBRACES EVERY STONE.

BE SLOW TO BE AS ROCK, BUT SWIFT TO BE AS WATER. EMBRACE THAT WHICH WOULD LOOK TO STOP YOU. IN DOING SO YOU WILL FIND YOUR WAY OVER, UNDER, AROUND OR THROUGH IT.