The origin and development of Karate is intimately tied to the history of the Okinawan people who brought it to its present form and preserved its traditions for centuries. A major root of the discipline, however, can be traced to ancient China.

Approximately 483 AD, Daruma Tashi a prince of a warrior sect, left his home and journeyed into the mountains of China in search for enlightenment. It is said that Tashi used his warrior training to help him to meditate for an amazing duration of time.
While on his quest Tashi was discovered by monks of the Shaolin (Small Forrest) Temple. The monks, impressed by Tashi’s focus in meditation pleaded with Daruma to teach them his ways. Tashi taught the monk’s a series of exercises that aimed to afford them mastery of the body, mind and soul. The exercises, often regarded as the 18 hands of the Lo Han, also known as monk fist boxing.
In the 8th centruy, Chinese feudal warlords invaded and occupied the Ryu Kyu Island known as Urma (Okinawa). They brought with them techniques of a fighting art that had developed from the 18 Hands of the Lohan, Chua’n Fa, also known as Shaolin Boxing or Shaolin Kung Fu. The Okinawan people had already developed a system of self-defense called Te or Hand. As the Chinese occupation continued, the Okinawan King, Sho Neopashi, was impressed by the discipline and character developed through this art developed by the Shaolin Temple and he ordered it to be combined with the teaching of Okinawan-Te. The combination of the Chinese and Okinawan system was actual beginning of Karate.
Among the more notable purveyors of the art Shaolin Boxing was a Chinese man named Kwang Shang Fu. Belive born in the late 1600s Kwang Shang Fu, (pronounced Kusanku in Japanese) was a master of Shaolin Chua’n Fa and would come to be the earliest recorded contributor to the creation of what is now known as Karate.

Among Kusanku’s students was a man named Yara, of Chatan Village. Yara was said to have been to sent to China at age 12 to study the classics and the arts of the Shaolin masters. Among his teachers was Kusanku and was also considered as one of the early purveyors of -Te throughout Okinawa.
During the 17th century, Okinawa was overrun and occupied by the Japanese. The Okinawan warriors were disarmed and forbidden to own, carry or use weapons. Faced with necessity of defending themselves and their people from their oppressors and having only their bare hands with which to fight, the warriors turned to the Karate, then regarded as the Chinese or Shaolin Hand. In those desperate years they developed and refined their techniques until their bodies were as deadly and as effective in battle the weapons that they were denied access to. Karate was taught in secret and was only known to scholars, royalty and people of other high station. Where and how it was taught was a mystery, but those known for their mastery were revered in their communities. One such master was Peichin Takahara.
Peichin Takahara was a monk and a member of the Okinawan social class and was revered as a great warrior. It is said that Peichin Takarhara was the first to distill the aspects of –Do (the way) as it pertains to Karate.

Peichin Takahara would go on to teach Kanga “Tode” Sakagawa in the mid 1700s. Sakagawa trained with Peichin Takahara for six years before Takahara instructed him to train with the Chinese master Kusanku. After six years with Kusanku, Sakagawa began spreading what he had learned throughout Okinawa. We was considered such an expert that he was given the nickname “Tode” which translates to Chinese Hand. In those times, the practice of Karate although remaining relatively secret and only being taught via word of mouth, became a course of exercise valued for it health and character building.

Likely the most revered master of that era was Tode Sakagawa’s most noted student, Matsumura Sokon.
In the late 18th century, Matsumura Sokon would collect and study the various forms of Karate that had grown up around Shuri City Okinawa and systemize them into what would be known as Shuri-Te (Shuri hand).

Sakagawa was an older man by the time that Matsumura came to him, and at first Sakagawa was reluctant to teach the young Matsumura. Sakagawa ultimately accepted Matsumura as a favor to the boy’s father and Matsumura would go on to train with the master for 5 years. Matusumura would gain the nickname “Bushi” which means warrior for his great martial arts skill. It is said that though he fought many battles he was never defeated. For this reason he would go on to become the Chief martial arts instructor to three separate kings of Okinawa.

Matsumura’s most famous student was Itotsu Anko of Shuri. Itosu is credited as the first person to introduce Shuri-Te to the public. Itosu served as the secretary to the last king of Okinawan, until the point where Japan outlawed the Okinawan monarchy. While in his position Itosu would use his influence to introduce Karate into the Okinawan secondary schools. He is known for standardizing the way that Karate is instructed and many of principles are still applied throughout the martial arts community including his ten precepts of Karate practice.

In his life Itosu taught many great Karate masters, many of which would go on to spread Karate throughout Asia as the foundation of many other martial arts that are popular today. Two notable examples are Tang Soo Do, the martial art practice by American action star Chuck Norris; Tae Kwon Do, the national sport of Korea; and Shotokan, the most popular form of Karate on the Japanese mainland. 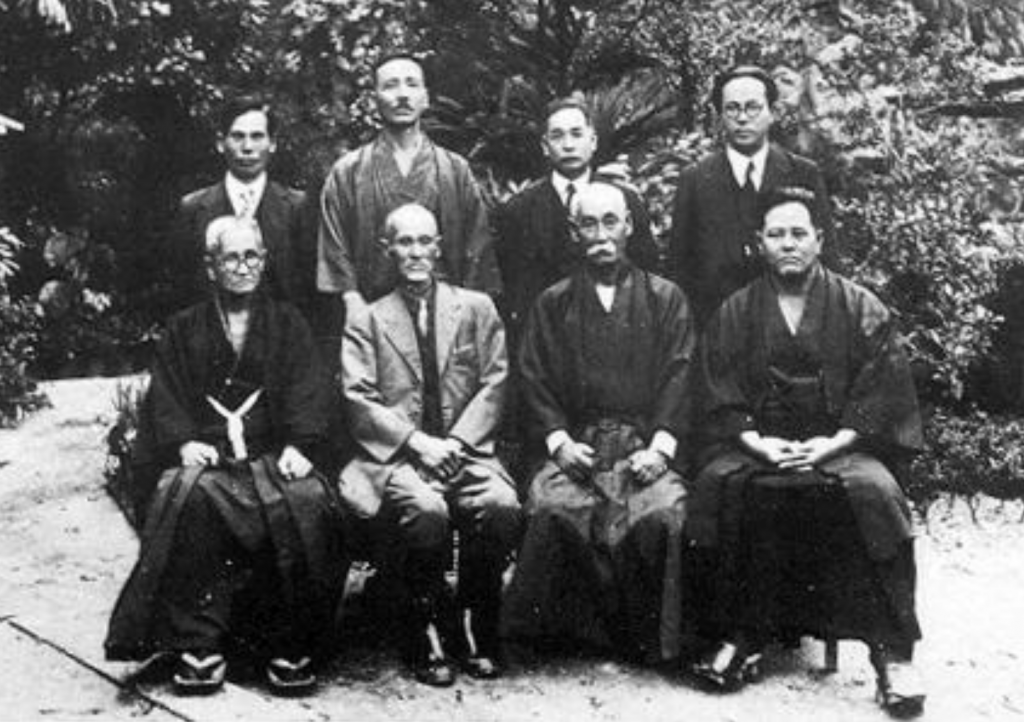 Itosu passed his legacy to Chosin Chibana (second row, third from left) who was first to call Shuri Te “Shorin Ryu.” Chosin Chibana was the last of the pre-World War masters and has been called “the Last Warrior of Shuri.” Chibana trained with Itosu for 13 years before Itosu passed at the age of 85. Chibana would be the first President of the Okinawan Karate Federation and the first Hanshi (grand or high master) of Shorin Ryu Karate.

Hanshi Hargrove began studying with Nakazato in 1963 and had the honor of being the first non-Asian to reach the rank of 6th Degree Black Belt in the Nakazato-Chibana-Itotsu-Matsumura lineage. In that time, Hargrove was given the sole responsibility to establish Shorin-Ryu Karate in North America. Hargrove maintained the exclusive responsibility for more than 20 years and has been noted for training some of the preeminent Karate practitioners in the Americas. Hanshi Hargrove was Sensei  McCammon’s first teacher and the person who promoted McCammon to the ranks of 2nd Degree Black Belt and 3rd Degree Black belt respectively.

Hanshi, Seiei Nakaza was a classmate of Hargrove in Okinawa in Nakazato’s dojo. Today, Nakaza was the founder and President of the International Kiyobukan Kyokai (Association of the pure warrior way) of which NRK Karae is a member. Nakaza founded the Kiyobukan in 2008 to further the legacy of traditional Shuri Te that is the historic core of Nakazato-Chibana-Itotsu-Matsumura lineage. Nakaza focused on finding the future of Karate in its history, and taught the virtues of health and personal development that date back to Matsumura and beyond.

Nakaza-Sensei passed away in  2013 and heired Kiyobukan to Hanshi (Grand Master), 9th Degree Black Belt, Brian K. Hobson.  Hobson was a Sempai (senior) to Sensei McCammon under Hanshi Hargrove and was responsible for much Sensei McCammon’s advanced and competitive training. He is also a long time, teacher, friend and mentor to Sensei McCammon.