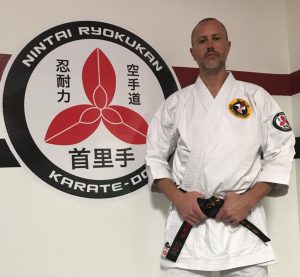 Sensei Chris Grau is a 2nd Degree Black Belt, fuku shidoin (assitant instructor).  He began is training at NRK Karate in 2014 after being inspired by the progress of his daughter.  Sensei Chris joined the dojo with prior training in Kempo Karate, that spawned in him an insatiable desire for growth and mastery in the martial arts.

Sensei Grau enjoys all aspects of his training, but holds particular passions for combative concepts and kobubo (or ancient weaponry).  Currently Sensei Grau holds a Brown Belt in Kobudo and is NRK Karate’s go to man for weapons review and coaching.

Through his time at NRK Karate Sensei Grau has also develop a passion for strength training and conditioning.  A constant tinkerer, Grau is instrumental in the strength training of the NRK Karate Competition Team.    Currently, he holds certification as  a USA National Karate Federation Coach, Level II, and a Regional Judge.   USA National Karate Federation, the governing body for Olympic Karate in the United States,  requires annual training an recertification of its coaches and officials.

Sensei Grau has a Bachelors Degree in Computer Science and is an enterprise computing architect and specialist.  He is a Director at Large of the San Diego Computer Society.

Sensei Grau is a father of two beautiful girls, Kaylee and Brenna, whom both train at NRK Karate. His wife Christa is a certified yoga instructor who actively supports the family’s karate training.